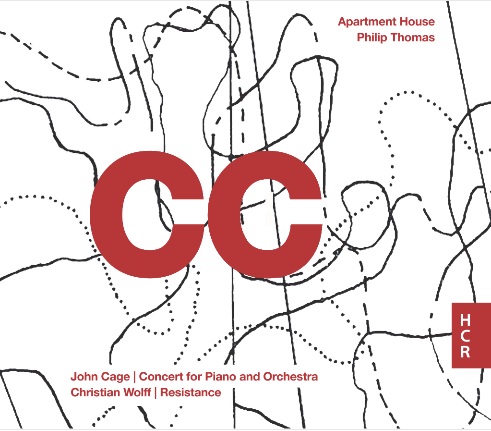 A double CD featuring Apartment House and Philip Thomas. The performance of the Concert for Piano and Orchestra is one of the outcomes of the AHRC-funded project ‘John Cage and the Concert for Piano and Orchestra’, and features the full instrumentation, with conductor (acting as time-piece) in a 53-minute realisation.
Wolff’s Resistance was commissioned by Apartment House as a partner piece to Cage’s ‘Concert’ and is composed for 11 or more instruments. This first recording is one of many possible realisations.

“This new performance is in all ways a revelation and an achievement of the highest order.” (American Record Guide)

“Performers of John Cage’s piano concerto could theoretically play nothing at all, if that’s what they wanted. The point is about choice. “John, you’re my man,” said a trombonist who played in the original performance. “I’ll play for you any time.” Trust is the making of indeterminate music and Apartment House’s new recording is all trust. Philip Thomas makes the piano part magnetic, like the centrifugal planet in an erratic constellation. Around him spin trumpet, violin, flute and others, everyone quick-witted and playful. After 53 minutes the tenuous ecosystem suddenly dissipates and I was left pondering stark real-world ecological resonances. Sixty years on, 83-year-old Christian Wolff has written a companion piece for Cage’s concerto that should feel like a throwback: the name Resistance, the quotation from a Pete Seeger protest song, the old chance techniques. But Wolff’s music, his gracious, urgent way of questioning how we relate to each other, still feel entirely relevant.”
– Kate Molleson (The Guardian)

“The history of Cage’s landmark indeterminate composition, the Concert for Piano and Orchestra, is well known. He made the piece for the 25th Anniversary concert of his career at New York’s Town Hall; to do it, he met with each performer taking part, noting what they could do and coming up with a notational system that would allow them much freedom in its interpretation—which included conventional
sounds as well as auxilliary ones that could be realized through a wide variety of
means. Faced with the extravagant freedoms of the score, the orchestral musicians behaved like idiotic comedians, improvising jazz licks and quoting Stravinsky’s Rite of Spring. Har har. David Tudor presided at the piano for the
premiere, and his performance of the score has long been considered definitive. (I
reviewed a later one, with Ensemble Modern, M/J 1998.)
Philip Thomas and his colleague Martin Iddon (a composer and musicologist) have been studying the Concert for some time; they are experts in this music and we are very lucky to have them around. This new performance is in all ways a revelation and an achievement of the highest order. The musicians in the Apartment House ensemble take their work very seriously, and the sounds they produce strike me as completely consistent with the score’s many freedoms. From now on, when I teach this piece, I’ll use this recording and am looking forward to studying it more thoroughly. The work is coupled with a 2017 Christian
Wolff work, Resistance, which employs a variety of musical styles and notational possibilities. Without the score, I can only assume the performance is on the highest level, but I think I’m safe doing so. I would advise obtaining this disc.”

“That the dedicatee of John Cage’s Concert for Piano and Orchestra (1957 58) is Elaine de Kooning (wife of the painter), and that some of the piano part is exhibited at MOMA, indicates the aesthetic ambidexterity of Cage’s artwork. Cage approaches the concerto form like a conceptual artist, rethinking the whole thing.

There is no complete score, only parts, each performer free to decide what he or she wishes to play. The piano part has 84 different types of notation, varying from the standard to the abstract. Cage determined the notated music by chance operations and blemishes on his manuscript paper. The conductor indicates not tempo but a sort of variable metronome against which the performers measure their respective tempos. Needless to say, recording the Concert for Piano and Orchestra poses unique problems.

The criticism often made of post-Webernian pointillism – that it struggles to sustain interest over large-scale forms – is also relevant here. Sounds that, at the time, had a ‘wow factor’ of newness have since been naturalised. How, then, to render their impact anew? Philip Thomas and Apartment House, out of what could simply be a flat plane, render a vibrant surface with all the activity of a Jackson Pollock. Thomas’s touch is nuanced and various, a steady centre around which the ensemble’s ephemeral voices appear. This version is twice as long as the previous Wergo recording but the extended length allows one to enter in and out of the music.

The work is paired here with Resistance, an Apartment House commission by Cage’s erstwhile colleague Christian Wolff. Roughly the same length as the Cage, it contains quotations of left-wing material from Cornelius Cardew and Pete Seeger, and is by turns sprightly and humane where the Cage is drifting and cosmic. It is an apt pairing.”

“John Cage’s Concert for Piano and Orchestra, which occupies the first disc of CC, is now 60 years old and has become enshrined as a classic of indeterminacy, a canonical work. Yet for piano soloist Philip Thomas it is a “fantastic carnival of sounds”. That level of exuberance is just what the score requires to rescue it from the canon and restore its life. Apartment House commissioned Christian Wolff’s Resistance (2017) in order to pair it with Cage’s Concert. Both scores embrace diverse possibilities for notation, so relationships within the ensemble are volatile, demanding concentrated attentiveness and continuous revision. Wolff incorporates brief musical quotations from Cornelius Cardew and Pete Seeger, but overall the precariously maintained coherence of Resistance rests on the group’s versatile reactions among themselves and their capacity for delicate negotiation within the possibilities of the work.”

“On today’s 2-CD set CC (NMC  HCR16CD) we get fine interpretations of two important American New Music High Modern works, one a mainstay classic, the other something brand new. Both are for chamber orchestra, performed with dynamic grace by the ensemble Apartment House and piano soloist Phillip Thomas. The works fill a CD each and consist of John Cage’s iconic “Concert for Piano and Orchestra” (1957-58) plus Christian Wolff’s “Resistance” (2017) in its world premiere recording.

The “Concert for Piano and Orchestra” performance presented here is one of the very finest, rivaling the 1972 recording by Ensemble Negativa released in Germany as part of the now quite obscure LP set Music Before Revolution.

The current version takes up a full 53 grand minutes. It has been built from 84 separate “notations,” various sets of codes and instructions for specific aural soundings in the “Solo for Piano” part, intended to be performed alongside of the separate orchestral parts, each a kind of solo performance which then in amalgam becomes the work as a whole. It exemplifies and embodies indetermination in the choice of musical texts, the enjoinment of each player to chose texts or abandon them at will, and the “clock hands” of the conductor, which speed up or slow down the progression of the music at the conductor’s aesthetically spontaneous whim. The texts chosen for this particular performance differ from previous versions in that there is a combination of previously used notations and new reconstructions as well.

So this performance is in effect one-of-a-kind, as every one is designed to be. The result in the right hands is a landscape of synchronies and dis-synchronies, sound punctuations out of silences for 14 instruments plus piano soloist. Apartment House comes through with a beautifully creative sound-sculpture-in-motion. It is a superb reading. I react like I did for the Ensemble Negativa version when I first heard it, with the idea now firmly held in my head that “John Cage doesn’t have to sound like s–t!” Indeed it sounds like what happens when musically sensitive instrumentalists are let loose and allowed to commune with the structural demands of wisely aleatoric Cage.

The new Christian Wolff work that comprises CD2, “Resistance,” sounds quite different as it was meant to. The work was commissioned by Apartment House for performance alongside Cage’s “Concert.” The instrumentation used here is the same as for the Cage, though the composer allows for a greater sized ensemble according to various specifications. Keeping to the same ensemble size helps us compare the two works directly and makes them each fully a part of the set. The piano part is a constant and like Cage, Wolff juxtaposes variously notated and aleatorically variable texts. The sound is denser, perhaps slightly less abstract, and filled with intersections and running contemporary phrasings that are less dryly monumental than the Cage. In any case the musical results cohere and sound well as an exciting New Music excursion.

Taken as a whole or considered separately, both of these performances and the musical instructions and specifications that make them possible become very much high modernism at its finest and most intriguingly open. The Cage is a masterpiece of its time and Apartment House do it benchmark justice. The Wolff most certainly seems like a masterpiece-in-the making.

Anyone who already embraces high modernism encounters an essential, indispensable release here. Anyone who wishes to take the plunge into the new sounds maelstrom might well start with this! Do not hold back. Get it!”