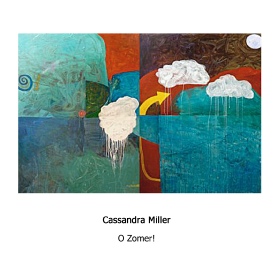 “The Sheffield-based label Another Timbre specialises in experimental music, from the postwar US generation of John Cage and Morton Feldman to the present day. Lately, it has made a special feature of Canadian composers, and among its latest releases are two discs devoted to the music of Cassandra Miller, who grew up in British Columbia and is now based in London. Her teachers have included Michael Finnissy and Richard Ayres, but, as the eight pieces on these recordings show, her music is hard to categorise, its starting points unpredictable and wide-ranging.

In Philip the Wanderer, composed for the indefatigable pianist Philip Thomas, the source is a recording of a Mozambican musician, while the solo-violin For Mira is based on a computer transcription of Kurt Cobain singing Where Did You Sleep Last Night. In every one of these pieces, though, Miller’s response is totally her own. The music never seems second-hand or derivative in any way.”

“I’ve been alternately baffled and knocked out but always charmed by her music, so here’s the chance to get some on record. O Zomer! includes the title piece and violin solo For Mira, both of which were played at the Cafe Oto gig a couple of weeks ago. The same musicians play here on the CD and so the performances are equally excellent – better, I should say, as the playing conditions would have been preferable. As with Mira Benjamin on For Mira, dedicatee Philip Thomas plays the piano piece Philip the Wanderer with expected authority. Any wandering in the piece is typically incongruous and beguiling: a slow rising up from the depths, followed by a declamatory pealing of bells and ending on a single, repeating scale ascending in the higher registers. At one point, the page turner starts to whistle in descant (here, the whistler is violinst Clemens Merkel from the Quatuor Bozzini). I could wonder why all this happens but it’s simply delightful as-is.”