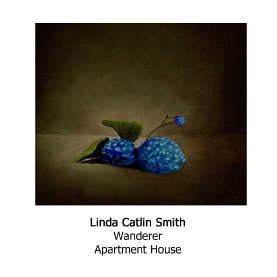 Following on from the success of Drifter, a new collection of Linda Smith’s chamber music, including Morning Glory, Music for John Cage, Stare at the River, Knotted Silk, Sarabande, Velvet, and Wanderer.

One of Alex Ross’s most notable recordings of 2018, as listed in the New Yorker

“quietly unassuming and entrancingly beautiful Feldman-esque music…each of [the pieces] using a single musical idea to devastating effect – shared melodic lines in the ensemble pieces Knotted Silk and Stare at the River, gradations of touch in Velvet, for two pianos – and all totally beguiling.”

“When judging living composers, time always helps to separate the wheat from the chaff…. slowly those who work over decades to discover a personal voice win through. It’s their music one reaches for, as one sifts through the CD pile. … Canadian composer Linda Catlin Smith, 61, creates beautifully meditative pieces made of slowly shifting colours, like gauze moving layers. …

“…winning in their exquisite gentleness are the performances from Apartment House…They reveal the intriguing woven textures of the music, in which murmuring tangles of melodies drift across beds of softly stroked chords. Smith has an uncanny way of capturing the sensuous quality of things, as in Knotted Silk, which has an intriguing juxtaposition of hard abruptness and soft shimmer….If only all releases of new classical music were as rewarding as these.”

“It may be that, like a great joke, the perfect composition subverts the expected in a moment of visionary opposition. In Another Timbre’s absolutely superb Canadian Music series, about whose genesis my Dusted colleague Michael Rosenstein wrote so eloquently just over a year ago, there is not a moment more unexpected, more completely uprooting than the last sonorities of Linda Catlin Smith’s “Music For John Cage.”  As with the disc containing it, that miniature distills everything that has made the series both satisfying and important as a muso-historical venture.

Smith is, by her own reckoning, a listener. So many composers of what we’re still calling “modern” music a century and a quarter after the fact could benefit from doing a little more listening!  Smith’s investigations into the audible permeate her music but nowhere more than in “Music For John Cage”’s final bars. To pigeonhole the little gem as some kind of A-minor exploration would be to shortchange it, to undersell it as an homage. As diverse as his music is, Cage explores concept as an improviser delves into register or timbre. Smith treats A and its attendant sonorities in similarly rigorous fashion; clusters, open fifths, arpeggiations and octaves float by, sometimes in repetition and always in dynamic variation. Then, with the unassuming nature of the beginning of the end, quietly cataclysmic, a C-sharp destroys or creates, difficult to say which. A chord solidifies around it, ushering the music toward silence in one of the most poignant and subtly evocative concluding gestures I’ve heard. Philip Thomas, one of the great recent Cage interpreters, is the music’s perfect proponent, giving life to the piece with his mastery of the piano’s orchestral capabilities.

Surprise comes in many forms throughout the disc, often in Smith’s gift for melody. On longer excursions, like “Morning Glory” or the titular piece, Smith eschews the notion of unison, presenting them in something approaching canon, approximating the effect heard in Miles Davis’ studio recording of “Nefertiti.”  Smith’s caramel-and-sea salt melodies drift by, taking on different characters as their orchestration changes, trumpet and double bass pairings biting back a bit harder than similar strands of strings at either end of the pitch spectrum. Her use of percussion often tends toward that politically incorrect notion of exoticism, as it sometimes did in Benjamin Britten’s dramatic music or in Webern’s later pieces, with ample employment of mallet, brush and cymbal. Guessing what compositional choices and luxuries are afforded the superb ensemble Apartmenthouse is difficult at best. As with her colleagues in the series, history gets a wistfully fractious revamping in “Sarabande,” complete with pseudo continuo, a harpsichord offering up a delicate over-the-shoulder nod.

As with every disc in the series, the recording is excellent, capturing detail without artifice, never getting in its own way or hampering musical progress. Likewise, nothing, whether tonal, timbral or temporal, is at first what it seems, as each gesture and phrase determines its own context. These compositions are deep without pretense, yet another point to be taken by too many present-day composers to name. Smith paints in multicolored but delicate strokes, quietly adding her second, and the final, contribution to one of Another Timbre’s greatest and most valuable accomplishments.”

“I mean this as highest praise to say the new Linda Catlin Smith CD on Another Timbre is more of the same. The two previous releases of her music, Dirt Road and Drifter, are superb and this disc of ensemble pieces played by Apartment House continues with the same fusion of clarity and sophistication in conception and execution. Wanderer is less diverse in its sound palette than the two-CD set Drifter, but gains in coherence, with the selection of works coming across as an extended suite. The piano acts as a thread running through the music, with Morning Glory beginning as a solo before opening out into different instrumental colours. Smith has a striking way of using her instruments selectively, choosing for each one a time to speak and a time to be silent. The piano runs like a spine through the next few pieces, changing to harpsichord in a very melancholy Sarabande before finding sensuous depths in the restricted colour range of the piano duet Velvet. By the end of the disc, the piano is subsumed into the ensemble for Wanderer, contributing small fragments in contrast to the other instruments, before finally disappearing for the final piece, a pensive duet for cello and vibraphone.

As mentioned before, when hearing Apartment House play Stare at the River live at Cafe Oto, Smith is still capable of surprising the listener. That work appears here, along with other facets of Smith’s work not heard on the previous two albums. Knotted Silk’s abrupt, staccato piano chords and percussion held against sustained winds and strings are suitably evocative, while the brief piano solo Music for John Cage is unexpectedly winsome, both embracing his professed openness in aesthetics while teasing him for his asceticism.”