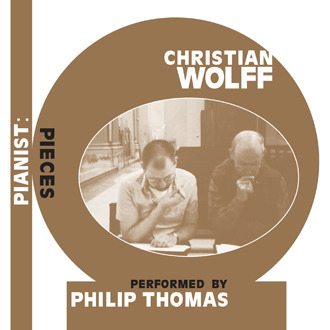 A 3-CD set of solo piano music by Christian Wolff, covering all the 1950s works and major works from 2001.
For Prepared Piano; For Piano I; For Piano II; For Piano with preparations; Suite; For Pianist; Long Piano; Pianist: Pieces; A Piano Piece; Nocturnes 1-6; Small Preludes; Touch

“It’s a fascinating collection, by turns beautiful and frustrating, to which Thomas is the perfect, committed guide.” (The Guardian)

“A cover image shows composer Christian Wolff and currently ubiquitous pianist Philip Thomas sitting side by side, their heads bowed forward, apparently poring over a score. A kind of dialogue is figured in this silent collaborative scrutiny. In a sense it provides a visual analogy for Wolff’s music, in which frequent gaps and pauses foreground the independent existence of individual sounds and isolated phrases, while beyond that perceptible discontinuity impalpable connections are forming. In the accompanying booklet Wolff suggests that a score is ‘one element in a conversation, an inducement to exploration, sometimes flexible, reusable, consistently useful’. Across three CDs, Thomas makes use of scores for all of Wolff’s solo piano music from the 1950s and others written since 2001, including the epic Long Piano (Peace March 11). These pieces require the performer’s decisions, welcome his input; and Thomas responds with rigorous self-discipline but also close attention to Wolff’s compositional voice.”
Julian Cowley, The Wire

“The expansive recording project, performed entirely by pianist Philip Thomas, is filled with engaging, spiky pieces. In part, the performances’ liveliness and immediacy can be attributed to Wolff’s use of “wedges,” rests of indeterminate length, which Thomas thoughtfully employs to dramatic and energizing effect. The early pieces, such as “For Prepared Piano” from 1951 and the demanding “For Pianist” from 1959, sound as fresh and surprising as the unpredictable discontinuities of the premiere recordings of “Small Preludes” from 2010. The panoramic 96 tracks of 2004-5’s “Long Piano (Peace March 11)” are extraordinary for their kaleidoscopic changes of approach to phrasing, density, melodic shape and dynamics as well as lengths of silence. “Patches,” Wolff’s name for the units of material, vary from as little as five seconds to the longest, a bit short of three minutes. Anticipating what will happen in the next moment only to have that expectation thwarted makes for absorbing listening. Pianist: Pieces is a mesmerizing three-hour encounter with a creative mind.”
– Glen Hall, Exclaim.ca

“Philip Thomas’s survey of the piano music of Christian Wolff may not be entirely comprehensive, but it spans almost the whole of the American experimentalist’s career as a composer, from his Cageian pieces of the 1950s to the explosion of creativity in the last decade. The earliest work here is For Prepared Piano of 1951, full of obsessive repetitions and irregular silences; the most recent, the set of 20 Tiny Preludes composed in 2010, in which many of the musical parameters – tempi, dynamics, even the choice of clef – are left to the performer’s discretion. The first disc is framed by Thomas’s two utterly different realisations of Wolff’s For Pianist, of 1959, which he calls “one of the most extreme instances of indeterminate music to have emerged from that period.” The second disc is occupied by the 96 pieces that make up Long Piano (Peace March 11) from 2005, a series of fragments that are sometimes separated by pauses, sometimes seamlessly joined together. It’s a fascinating collection, by turns beautiful and frustrating, to which Thomas is the perfect, committed guide.”
– Andrew Clements, The Guardian

“Thomas is both a superb pianist, of the new music bright-and-precise school—everything in sharp focus, the range of articulations and dynamics unfailingly delineated—and an expert on Wolff’s music, his engagement with it both analytically deep and aesthetically sympathetic.”
– Matthew Guerrieri, New Music Box (for full discussion of the music, see here)