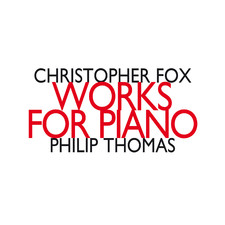 “In realising Fox’s Thermogenesis pianist Philip Thomas initially wears big mittens. These are removed to reveal gloves which in turn are discarded, leaving the performer to complete the task bare-handed. This playful piece was conceived to demonstrate how a musician might contrive to get warm in a cold climate. Fox compositions often seem to involve an idea finding its material and taking on weight, rather as words jotted on paper by Ian Hamilton Finlay – a poet Fox admires – would expand in significance when carved in stone and embedded in landscape. Entrusting the manual work to longterm collaborator Thomas is a wise step. In his hands L’ascenseur, a vigorous test for the piano’s fidelity and player’s evenness of execution, advances like sonorous rubble jostling on a rising conveyor belt. at the edge of time probes the afterlife of a single recurrent pitch through the interaction of harmonics, at length and absorbingly. Republican Bagatelles churns variations by Beethoven and Ives, dredges up “God Save The Queen” and “The Red Flag”, and ends with a two-fisted barrage. Quirky, stimulating and substantial music.”
Julian Cowley, The Wire

“Fox’s music has always been pleasingly hard to categorise; has any other composer been labelled both a minimalist and a new complexist? Of course he’s neither, and thank goodness. Besides this completely original, unpindownable quality, what I also like about Fox’s music is how it doesn’t take itself too seriously, while being deep down very serious indeed. By way of example, at the edge of time is a 15-minute study in a single pitch and its harmonics that never once sounds like a chore; Thermogenesis is a quasi-theatrical gesture that requires the pianist to begin playing in mittens, removing those to reveal gloves, and only in the final third to play with bare hands. I’ve seen Thomas play this piece, and while it has its undoubted silly side it also works as ‘proper’ music. Those who know Fox’s piano music only from Ian Pace’s Metier recordings of a few years back should relish the complimentary robustness that comes out here.”
– Tim Rutherford Johnson, The Rambler