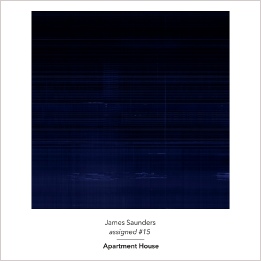 A specially composed work for this recording, James Saunders revisits earlier compositional concerns with a fresh perspective. assigned #15 is a single substantial work written for and performed by Apartment House.

” Many conventionally trained musicians surely feel intimidated by that kind of trust and exposure. Others, such as the members of Apartment House, who perform Wolff’s work with notable conviction and success, thrive on that interpretive latitude. Creative imagination as well as intelligence, pleasure in exploration and discovery, inquisitive engagement with a wide range of music conceived in the wake of Cage and (not least) a well developed sense of fun seem to be requirements for such musicians, no less than technical skill and virtuosity.
Saunders’s assigned #15 is part of a series that draws material from his modular composition project #[unassigned]. A bespoke series – to use his word – and this realisation was tailored for a specific occasion, at St Paul’s Hall, Huddersfield in April 2015, and for a particular incarnation of Apartment House. Saunders himself, working with dictaphones and shortwave radio, and Kerry Yong playing chamber organ create a fuzzy glow, bristling with sferics, that hovers around enigmatic wispiness and threshold articulations. Scrapes, scribbles, taps and busy rummaging transmit from Bridget Carey’s viola, Anton Lukoszevieze’s cello, Nancy Ruffer’s flute, Simon Limbrick’s percussion and Philip Thomas’s piano. The result is engrossing: a luminous wash over textured scrawl and discreet graffiti: a Cy Twombly canvas in sound.”
– Julian Cowley, The Wire

“Heard as a piece played by the seven musicians, it seems unlikely one would suspect the modular roots of this composition. Where random playing a series of one-minute recorded modules can lead to clunky jump-cuts between modules, with “assigned #15” that is never the case and it hangs together well, sounding as if it was conceived in its entirety not a chunk at a time. For that, credit is due to Saunders for selecting compatible component parts and integrating them together well, and to Apartment House for their smooth performance of it. The ensemble creates a highly satisfying soundscape that is broad, deep and rich in detail. The piece is engrossing for its full duration and, no many how many times it is heard, it keeps on giving.”
– John Eyles, All About Jazz