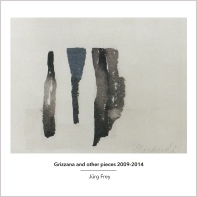 A double-CD set of recent solo and ensemble pieces by Swiss composer Jürg Frey, with the composer himself playing clarinet.

“Performed sensitively by Ensemble Grizzana, the album is an epic study of fragile balances, to borrow one of the set’s titles. Even its most complex and multi-layered works – ‘Extended Circular Music No.8’ for septet and the seven part title track for sextet, both from 2014 – sound perilously collapsible and feather-light, assembling string and wind-drones and piano detailing into melodic convergences and shimmeringly dense drone harmonics.”
– Nick Cain, The Wire

“Back in 2007, at the outset of his label, Simon Reynell speculated that about one-third of Another Timbre releases would be contemporary classical with the other two-thirds being improvised, split between European Free Improv and electro-acoustic improv. With the benefit of 20-20 hindsight, we can see that the label has evolved and the reality has become very different, particularly in recent years. Although the boundaries between the two are never cut and dried, Another Timbre discs featuring compositions have increasingly outweighed those featuring freely improvised music so that they are now in the majority.

A crucial turning point in that evolution (hindsight, again) was the release of that six-disc Wandelweiser box, on which Jürg Frey featured prominently as composer and performer. The clarinetist was also featured as a player on the excellent double CD Cantor Quartets (Another Timbre, 201) of compositions by Antoine Beuger, so it seems proper that Frey’s own compositions now get their own two-disc showcase. The album is structured around four separate versions (one opening and closing each disc) of “Petit fragments de paysage,” each one with a different pair of instruments—clarinet/cello, organ/piano, violin/viola, flute/viola. All four versions have a mellow, tranquil atmosphere and duration close to five minutes; despite the differences of tone and timbre, they achieve similar moods with their two instruments fitting together perfectly, a credit to Frey’s writing. Just as important to the album is the title composition “Grizzana,” a suite of seven pieces ranging in length from just under two minutes to nearly four. On them, the all-acoustic sextet of clarinet, flute, violin, viola, cello and piano creates a slowly-evolving soundscape in which every single sound is savoured and afforded equal status. Beautifully simple and simply beautiful.

Everything else on the album attains the same high standard as those pieces. “Extended Circular Music No.8” (which blends Ryoko Akama’s electronics with the “Grizzana” sextet) is a continuation of the exquisite series of seven pieces, composed between 2011 and 2014, that were featured on Jürg Frey (Musiques Suisses, 2014), performed by Mondrian Ensemble and Konus Quartett. The album’s longest track, at nearly thirty-one minutes, is “Area of Three,” a trio of clarinet, cello and piano; it never settles for “just” being a trio but uses that as the basis for a varied and far-reaching three-way interaction between them which builds an intense atmosphere. Altogether, an essential album.”

John Eyles, All About Jazz