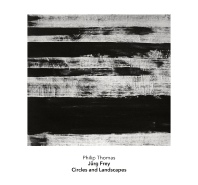 Recent piano music by the idiosyncratic Swiss composer. See here for Philip’s profile of the composer.

“it is difficult to imagine his renditions of the pieces being bettered by himself or anyone else.” (All About Jazz)

“When the Swiss clarinetist and composer Jürg Frey was celebrated as Composer in Residence at the 2015 Huddersfield Contemporary Music Festival, pianist Philip Thomas Philip Thomas wrote of him, “Jürg Frey the composer is inseparable from Jürg Frey the composer. To understand his music is to know that underlying each event, each phrase, each rest, each relationship, is the beating heart of a performing musician.” If Thomas needed to cite musical evidence in support of those words, an ideal choice would be the current album of Thomas’s own renditions of six Frey compositions.
The compositions—ranging from 1992’s brief “In Memoriam Cornelius Cardew” to “Extended Circular Music No. 9” from 2014/2015—paint a coherent, integrated picture of Frey the composer. That is even truer when the current album is considered in conjunction with the Another Timbre 2015 double CD of Frey compositions, Grizzana and Other Pieces 2009-2014, played by a seven-member ensemble that included both Frey and Thomas.
The success of Circles and Landscapes owes as much to Thomas as to Frey’s compositions, with Simon Reynell’s warm, intimate recording capturing every nuance of the pianist’s performances—vital, given the importance of the relative volumes of the notes, the spaces in between them and their decay-times. Thomas manages to get all those just right—in fact, so right that it is difficult to imagine his renditions of the pieces being bettered by himself or anyone else.
For example, lasting nearly half-an-hour, the centrepiece of the album is a version of “Pianist, Alone (2)” which, true to its title, makes the pianist sound very exposed. Any slight glitch of timing or pedalling would be all too obvious, but Thomas delivers a flawless performance so such matters become irrelevant, leaving the listener to savour the spare beauty of the composition in Thomas’s hands. Throughout the album, that symbiosis of composer and performer is repeated time and again.
Having begun with a Thomas quote, let’s end with one from Frey himself. In a 2015 interview on the Another Timbre website , he made the following significant comments, “In my work, I consider each note as an individual, I respect each note as a sound personality. This may also be one of the reasons why I continue to compose by hand: I can give my attention to every note. I take responsibility for the note, and I also want that every note itself feels good and right in its place and in the context.” No further comment is necessary… Frey’s loving care and attention to detail shine through in his work. Simply exquisite.”
– John Eyles, All About Jazz

“Circles and Landscapes features a program of solo piano pieces performed by Philip Thomas, one of the preeminent interpreters of contemporary piano compositions as well as an accomplished improviser. Pitch relationships have always been central to Frey’s compositions, and in these pieces, composed over the last five years (with the exception of the opening “In Memorium Cornelius Cardew” from 1993) the harmonic underpinnings are even more pivotal to the structural foundations.
…Frey has stated about his music, “A sequence of notes is most composers’ starting point. And it’s where I stop. Not that I cease to do anything at all; sometimes it takes a bit more, sometimes a bit less. There are so many traps, so many ways of destroying the sequence, because people think it needs a little compositional help … More important is the relation of the material to elapsing time.” Listen to the half-hour reading of “Pianist, Alone (2),” and one hears these elemental building blocks accrue with a steadfast forbearance. Thomas places each phrase and chord-set evenly across the duration of the piece and the music advances with an unwavering beauty bereft of any standard notion of melody or harmonic progression. “Extended Circular Music No. 9,” composed over 2014 and 2015 layers in even more brooding consonance over its half-hour course. Yet even here, the music proceeds with notes and chords sounding alone with a sense of succession rather than melodic or harmonic progression. ”
– Michael Rosenstein, Point of Departure

Jürg Frey’s compositions can be so elusive, so hard to see, that the intention behind them often seems out of reach. A composer’s intention, of course, isn’t requisite to getting something from his or her work, but in the hazy overlap of minimalist improvisation and minimalist composition, that overarching feeling of motivation (especially in ensemble work) is often the only, or at least primary, characteristic suggesting a preconceived plan of action.
A clarinetist himself and a member of the Wandelweiser Group of contemporary composers concerned with using silence, Frey’s work bears certain resemblances to the master of minimalist composition, Morton Feldman. Both are given to extended pauses, repetition and shifting time. But Frey also works in microtones and gradual glissandoes, creating an ambiguity quite unlike Feldman the formalist’s clear (if slow) statements. Such blurring isn’t easily achieved on the piano, however, which makes Frey’s compositions for that instrument distinctive, and arguably his strongest work.
Circles and Landscapescollects six of Frey’s compositions for solo piano, all played with a fragile beauty by the British performer Philip Thomas, who has given the premieres to several Christian Wolff compositions and has worked with the Merce Cunningham Dance Company. The set opens with the briefest of the pieces, dedicated to an early cartographer of contemporary composition. “In Memoriam Cornelius Cardew” is also by far the earliest piece on the disc, dating from 1993. (The other works are all from 2010-2015.) It makes for a fitting preamble to the 74 minutes that follow: short, stair-stepping descents that never reach a bottom. The other small-scale piece here is “Miniature in Five Parts”, which is the most formal in meter and tonal structure presented — almost startlingly so.
The remarkable centerpiece of this elaborately set table is the half hour of “Pianist, Alone (2)”, a Feldman-esque title for the most Feldman-ian piece presented here. The piece moves easily with no need for tonal conclusions and no resistance to them when they’re happened upon.
The album is dominated by circles (the landscapes must be off in the distance), with “Circular Music No. 5”, “Extended Circular Music No. 2” and “Extended Circular Music No. 9” comprising about half the playing time. Placed intermittently across the program, their single notes and occasional clusters, primarily in the upper register, seem predictable but will trick you every time, like looking for patterns in a cloud of fireflies.
– Kurt Gottschalk, The Squid’s Ear

“The piano is close-miked on this CD, focussing on the grain of the instrument’s sounds. Thomas’ playing is softly-spoken but full-voiced – well suited to the quiet but indomitable character marking out a trail through an empty expanse”
– Ben Harper, Boring Like a Drill