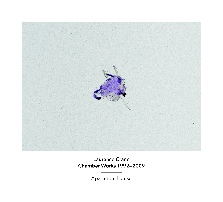 A double-CD of music by Laurence Crane, featuring Apartment House, including Philip Thomas performing the solo work premiered by him in 2009, Ethiopian Distance Runners

“This particular recording of Crane’s work is a double CD of chamber music, performed by members of Lukoszevieze’s group, Apartment House. It not only provides a strong overview of his chamber music, but also is important for rendering his significant relationship with Apartment House in permanent form – they have collaborated frequently over the past two decades. The shared aesthetic evinced on this release is hence no surprise: the recording is imbued with the sense that composer and performers are on precisely the same page, revelling in a clean, unfussy style, and happy swimming against stylistic tides. The two discs have different characters, perhaps charting a slight change in Crane’s music over the years – the first disc features the earlier works, written from 1992 to 2002, whilst the second features those from 2003 to 2009. The first is by and large lighter listening, as amply demonstrated by the tranquil Sparling (1992), a five-and-a-half-minute piece which appears three times, in different arrangements, over the course of the disc. Clarinettist Andrew Sparling – for whom, unsurprisingly, the piece was written – features each time, but he is joined first by Alan Thomas on guitar, then by Philip Thomas (no relation) on piano, and finally by a string quartet for Sparling 2000. Though the protagonist, Sparling has the simplest of parts: just one slow two-note phrase, which repeats over and over again while the accompanying chords shift enigmatically beneath. The harmonies are the same in each of the three versions, but the slow pace and the emphasis on timbre mean that each has a contrasting character, and indeed sounds like a completely new piece. This radically economical approach to material is typical of Crane’s music generally, in which the simple elements of each piece are presented in the precise context that maximises their effect. Another piece on the first disc, Riis (1996) for electric organ, clarinet and cello, also shows extreme judiciousness and frugality: the interjections for cello harmonics and clarinet are uncannily well attuned to the long, held organ chords, and the combined texture becomes not so much simple as otherworldly. It is perhaps on this recording, incidentally, that the particular talents of the performers are most apparent – the virtuosity here is in their sensitivity to tone and ruthlessly clear ensemble. On the second CD, a darker tinge intermittently emerges. Layers of ominous percussion cut through several of the scores (notably John White in Berlin and Four Miniatures, both 2003), and the first of the Four Miniatures is extreme in its flirtation with near-silence. Here, violinist Gordon MacKay bows a mute, Simon Limbrick plays his bass drum as softly as possible, Philip Thomas muffles his occasional low notes with a hand on the piano strings, and flautist Nancy Ruffer is instructed to play with ‘more breath than pitch; avoid pitch as much as possible’. John White in Berlin has a sinister edge, the metallic percussion creating a sheen that cuts through the ensemble’s delicate held notes. Piano Piece no. 23 – ‘Ethiopian Distance Runners’, an epic by Crane’s standards, is softer in mood, and beautifully presented by Thomas. Its greater length and many repetitions create a piece a little more akin to what conventionally gets called minimalism, though this is not a particularly useful label to apply to a composer so clearly treading his own path. The overall impression from the later disc is of an opening out: the constituents are similar to those on the earlier disc, but they are taken in unexpected, new directions. It is proof that the lack of theoretical encumbrances in Crane’s style does not curtail his artistic or affective range.”
– Paul Kilbey, Tempo

“Laurence Crane’s music is quietly unassuming and perhaps gently subversive. It deals in the common currency of tonal harmony and scale patterns, yet does so in ways that never seem cliched, arch or predictable. It’s possible to guess at the composers who have influenced his style – Satie and Feldman historically speaking, Howard Skempton more immediately. Like Skempton, Crane seems to possess the ability to make the simplest musical idea into something compellingly beautiful. Fourteen of his chamber works are included in this collection; none are very substantial and most of them are less than 10 minutes long. They include three versions of the same 1992 piece, Sparling, composed for Apartment House’s clarinettist, Andrew Sparling. The spare, chordal accompaniment is given to different instruments – guitar, piano, string quartet – in each realisation, and its quietly nagging lyricism haunts the first of the two discs like a benign ghost, while other pieces around it, such as Riis from 1996, often conjure up memories of the English experimental composers of the 1960s and 70s.”
– Andrew Clements, The Guardian

“This double CD release puts Laurence Crane in the spotlight as never before. The music is played by Apartment House, an ensemble with whom Crane has worked closely, writing various pieces for them. These recordings were supervised by Crane himself, indicating that they come with his seal of approval. Although Crane began composing in the early to mid 80’s, the music here is drawn evenly from across the years 1992 to 2009, a classic period that takes in many of his key compositions. Across this recording and the one above, most intriguing are the three pieces from the 90’s—”Bobby J,” “See Our Lake” and “Riis”—that occur on both, allowing comparison of the versions. Despite the differences of personnel and instrumentation, such comparisons reveal that, in different hands, Crane’s compositions create remarkably similar emotional spaces, and their formal beauty never risks tipping over to become cloying or mawkish. Of the more recent compositions, “Seven Short Pieces” (which lives up to its title? they all clock in at under two minutes) is an object lesson in mood manipulation, as Crane deploys his limited palette to subtly change the feel from piece to piece. In total contrast, the prolonged—nearly 22 minute—”Piano Piece no. 23 ‘Ethiopian Distance Runners,'” performed solo by Philip Thomas, is an eloquent illustration of a recent Crane quote, “Another metaphor that I’ve used before for thinking about my work is that of walking through a landscape, where the landscape remains essentially the same, but little details in it change, or come into and out of focus as you walk through it. So your experience when you’ve got to the endpoint will have changed, but the landscape itself has not changed much.” This is an essential album, sure to be one of the year’s very best.”
– John Eyles, allaboutjazz.com

“For newcomers to the world of experimental music – hovering happily between composition and improvisation, determinism and experiment – to which another timbre dedicates itself, this is the disc I would probably turn people towards first. Although I would do that only on the basis that Laurence Cranes’ musical language is the least forbidding, based as it is on steady, even rhythms, legible, tonal harmonies, simple harmonic progressions (often just alternations of two chords). But, as Michael Pisaro points out in a lovely short essay on the AT website, despite all this Crane’s music is also ‘quietly crazy, even absurd in its extremely understated way.’ It certainly isn’t what it seems. It couldn’t possibly be. You can’t get away with writing music like that, of such surface simplicity as to have practically no surface at all. Yet Crane does; and no one else. So what is there? I suppose we might each see something different reflected in Crane’s still waters. What I find, first, is absolute precision, coupled with an almost complete absence of redundancy. Clearly there is no ornament in the usual melodic sense, but neither is there any in a more conceptual sense. You actually try to project something clever behind the notes that you hear, those chords alternating in slow footsteps, but the music bends like a reed, absorbing and evading. It’s some of the most yin music I know. Disc 1 contains nine pieces, mostly from the 1990s, mostly shorter. As well as three versions of Sparling – written for Apartment House’s Andrew Sparling in 1992, and something of a signature Crane piece – we have Trio (1996), Raimondas Rumsas for cello (2002), See Our Lake (1999) for alto flute, clarinets, violin, cello and vibraphone, Riis (1996) for clarinet, cello and electric organ, Bobby J (1999) for electric guitar, and the three pieces of Estonia – Erki Nool, Mart Poom, Arvo Pärt – for flutes, clarinet, violin and cello.* For those who know a little of Crane’s music already, this is the most familiar territory of homorhythmic chords, simple timbres and so on. Disc 2 contains five pieces, mostly longer, and all from the 2000s: Seven Short Pieces for bass flute, clarinet, violin, cello and piano (2004), Piano Piece no.23 ‘Ethiopian Distance Runners’ for solo piano (2009), Four Miniatures for flute, violin, percussion and piano (2003), Come back to the old specimen cabinet John Vigani, John Vigani Part 1 for clarinet and auxiliary instruments (2007), and John White in Berlin for cello, electric guitar, percussion and piano (2003). This is the stranger of the two discs. The instrumentation gets a little less conventional, the sounds a little less pure – witness the percussive knocks and violin scratches tucked away in the Seven Short Pieces, or the noise-making and droning auxiliary instruments of John Vigani. The chord progressions get less straightforward. A general air of uncertainty starts to inhabit the music: the instrumental parts seem more exposed, without a solid ensemble homophony or tonal centredness to back them up; there is a greater use of silence, and of dissonance, and of dynamic contrast. It is still just as ungraspable, but now it seems even more bewilderingly so, given the seemingly greater density of musical information. This is a significant release I believe; I hope it will prove to be. Crane’s strange vision has been lurking around the periphery of new music for a long time, almost like a secret handshake for those in the know. You’ve either heard it and been convinced, or you haven’t heard it. For those of us who have there are still surprises here: the late 90s pieces Riis and Bobby J, for example, have an almost unseemly lushness of sound; Ethiopian Distance Runners unfolds over an unCrane-like 22 minutes. John White in Berlin is something else again; in context quite a shock. While this isn’t exactly music of wild emotions or high contrasts, there is plenty here that reveals Crane as a composer of substantial range. Now that this release is out, here’s hoping it will introduce the impenetrable transparency of his music to a much wider audience.”
– Tim Rutherford-Johnson, The Rambler

“Though I’ve singled out certain members of Apartment House, their collective playing is first-rate. Throughout the set, they illustrate the intensity of focus demanded by music that brings so many minute structural details to the fore. Recorded under the composer’s supervision, this set must now be regarded as infinitive. With a recording every bit the playing’s equal, it is also one of the best releases in Another Timbre’s catalog. Here’s hoping that this retrospective will bring Laurence Crane more of the recognition he has long deserved.”
– Marc Medwin, dusted magazine