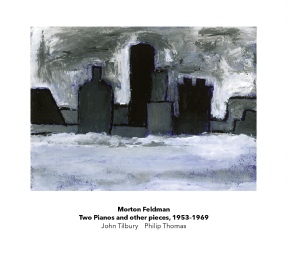 “Every one of these exemplary performances, with John Tilbury and Thomas leading the way, seems to be totally immersed in this very special expressive world” (The Guardian)

“Though the last 10 years has seen a steady flow of new recordings of Morton Feldman’s music, those have tended to concentrate on the remarkable series of works from the final decade of the composer’s life. But how his music achieved the refinement and clarity of those often greatly extended late pieces has been less thoroughly explored. This entrancing and consistent collection, mostly made up of works for one or more pianos, but also including chamber pieces involving other instruments – strings, percussion, brass – focuses on Feldman’s music of the 50s and 60s; the earliest piece here is Intermission 6 for one or two pianos, from 1953, the latest is Between Categories, for two ensembles, from 1969. All 12 works demonstrate, as the pianist Philip Thomas points out in his superbly thorough commentary, “the intensity of Feldman’s experimentation with notation and sound” during that period. “Considering the works chronologically,” Thomas says, “one senses the composer trying out, teasing and developing means of notation to get close to his desired elasticity of time and duration.” In all of these works, the pitches are precisely specified in the score; none of Feldman’s 50s forays into total indeterminacy and purely graphic notation are included. But the performers are given a great deal of freedom in deciding how long individual sounds last, how they decay and how they are co-ordinated between performers. There is a huge range of ways in which Feldman lays out his scores, and in what he expects of his performers, as if testing these different notations to destruction; in the works that came afterwards, from the early 70s onwards, he would return to much more conventional methods. What is so remarkable about the music here, however it is assembled and put down on paper, is how transcendently beautiful so much of it is, its composer unmistakable. As in the later, better known works, every pitch, every chord seems precious. Every hint of rhetoric is a seismic event, even when the dynamic range is so deliberately confined – “The music is intended to be quiet and is best played at a low volume,” says a note on the sleeve. Every one of these exemplary performances, with John Tilbury and Thomas leading the way, seems to be totally immersed in this very special expressive world: one of the most extraordinary of any composer’s in the second half of the 20th century.”
– Andrew Clements, The Guardian

“…this is one extraordinary release…It’s hard to know what to say except to express the contention that were I forced to listen to nothing but these performances for the next year or so, I can imagine worse fates. Absolutely spellbinding, the marriage of conception on Feldman’s part and crystalline, hyper-sympathetic interpretation by the two pianists. And really, I could say the same about almost every track here but that would be pointless. A sublime balance of the poised and the incisive, restraint plus the willingness to (gently) attack. It’s futile to pick favorites but “Piece for Four Pianos” is also profoundly moving and deep and I think I even slightly prefer it to the 1958 recording with Feldman and Tudor. I can’t even begin to choose among the ensemble pieces; each one is marvelous, shimmering, thoughtful–choose your adjective. Everything about the release, conception to execution, is just perfect; one of the finest things I’ve heard in a long time and an absolute must for any lover of Feldman, warts and all. Apart from the classic Tilbury recording, “All Piano”, this might be my favorite Feldman release ever.”
– Brian Olwnick, Just Outside

“It has become a truism that AMM pianist John Tilbury is an interpreter of Morton Feldman’s music par excellence—one of the very best, if not the best. Such opinions are backed up by his Feldman recordings such as Morton Feldman: All Piano (LondonHALL, 1999), Triadic Memories—Notti Stellate A Vagli (Atopos, 2008) and For Philip Guston (Atopos, 2013). Developed over decades, his touch, timing and note placement make Tilbury’s readings of Feldman fresh and alive—as close to definitive as one could hope for. So, for this new double CD of Feldman piano pieces, there could surely have been little debate that Tilbury’s name had to be first on the team sheet. Unlike the albums cited above, Two Pianos and other pieces, 1953-1969 does not feature Tilbury alone at the piano but in the company of from one to seven other musicians. On eleven of the twelve tracks he appears on, he is joined by at least one other pianist, with “Piece for Four Pianos” featuring Tilbury, Philip Thomas, Catherine Laws and Mark Knoop all on pianos. Thomas himself appears on twelve tracks, being the featured pianist on “De Kooning,” the album’s one track without Tilbury. (On his blog, Thomas’s own thoughts on this recording, and on Feldman generally, are fascinating.) Across the two discs, the album includes a range of different contexts for pianists to play together. It opens (and closes) with Tilbury and Thomas together on the 1957 composition “Two Pianos,” a piece that first helped introduce Tilbury to Feldman’s music when he and Cornelius Cardew played it together at Conway Hall around 1960. Each pianist is given the same single sheet of music to play, moving through it at their own pace. The end result is a complex piece in which the two pianos overlap and complement one another to good effect. To emphasise the variable nature of the piece, for comparison purposes a second version concludes the album. In both versions, the quietness of the performances focuses listeners’ attention on the sounds rather than sweeping them along. Also from 1957, “Piece for Four Pianos” repeats the format of “Two Pianos” but for four pianists. Famously, at one performance of the piece, where John Cage was one of the four pianists, he finished twenty minutes after the other three! Despite differences between the four pianists, no such mismatches are in evidence here, and the piece, though more complex than the two-piano version, creates just as impressive and pleasing an effect. In 1966, Feldman adopted a totally different approach on “Two Pieces for Three Pianos.” As Thomas explains, rather than the three pianists all playing the same music in their own way, “The first piece combines two different notation types: the first and second pianos read only stemless noteheads, with the instruction to play each event once the decay of the previous event has begun; the third piano part is fully notated with very precise durations, metre and ever-changing tempi. Each player follows their own part dogmatically—there is very little room for listening and responding to the other players.” Consequently, the three pianos—Tilbury, Thomas and Laws—fit together perfectly, like the pieces of a jigsaw, together creating wonderfully tranquil music that unfolds at its own pace, with its own irrefutable logic? in a nutshell, classic Feldman in peak form. Taken together, all of the piano pieces here constitute an object lesson in Feldman’s writing for his favourite instrument. Very different, but just as beguiling are the four tracks that combine one, two or three pianos with other instruments including cellos, violins, chimes, percussion, horn and trombone. Interspersed among the entirely piano-based pieces, they serve to add variety to the album’s soundscape and to demonstrate that Feldman’s music for other instruments is just as effective as that for piano. Before the arrival of this album, it seemed as if Another Timbre releases by Laurence Crane and Skogen would battle it out for best recording of 2014. Now, though, it has become a three horse race that is too close to call… ”
John Eyles all about jazz

“‘The magic is to make sounds out of pitches,’ Morton Feldman suggested in Darmstadt in 1984. To grasp what that might mean in practice, simply listen to Piece for four pianos, played by John Tilbury, Philip Thomas, Catherine Laws and Mark Knoop. This composition from 1957 is notated as to pitch, but Feldman left it open to performers to take the same single-page score at their own chosen pace, allowing the mercurial qualities of personal touch, sensitivity to each note’s decay, the acoustic properties of the hall, idiosyncracies of a particular instrument and other factors unspecified by the composer to work audible magic. Tilbury and Thomas act as the hub for this entire collection, combining their distinct yet equally refined interpretative identities in a series of duets, and within mixed chamber groups involving fine musicians such as cellist Anton Lukoszevieze and violinist Mira Benjamin. These exploratory works, from Intermission 6 (1953) to Between Categories (1969), form a compendium of spellbinding sounds.”
Julian Cowley, The Wire