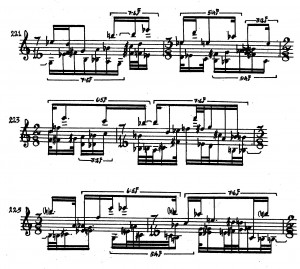 One of the works which has occupied me over the past 18 months is Bryn Harrison’s Vessels. It was composed for me as part of my ‘Canada Connections’ project which took place over 2012-13, and was premiered at the University of Sheffield on October 30th 2012. For that occasion and a few subsequent performances, mainly in Canada in April 2013, Vessels was a 20-minute piece. Soon after, Bryn felt that it was needing to be a longer piece and, partly in response to an invitation to record the work for Simon Reynell’s another timbre label, he extended it so that it now lasts approximately 70-75 minutes (see here for an interview with Bryn about the piece and the recording, and here for an extract of the recording). As such it is an extraordinarily mesmerising work, toying with the listener’s memory and sense of time, present past and future. Whilst the extension features absolutely no new material, there are passages which, even for me, even now, feel as if they are entirely new. Pitches, relationships and rhythms are reconfigured, or reiterated exactly, in a mysterious toying with the material.

I have become very close to the piece; I feel it perfectly suits my sensibility and my touch. I’m delighted to note that others clearly feel similarly, and reviews and feedback on both live performances and the CD recording have been (mostly) extremely positive.[1]  However, I have a confession to make…

Whilst I am very happy that reviews particularly mention my touch and focus, it is a piece that basically plays itself.

What ‘magic’ there is is due in most part to the register of the piano combined with the dynamic level, the transparency of the texture, and the quality of the pitch selection and relationships. The piece has a range of exactly three octaves, from G3 (a fourth below middle C) to G6, which is a very luminous range of the piano. The extremely quiet dynamic requires me simply to so touch the keys that the hammers barely brush the strings, whilst ensuring just enough strength in the fingers to allow the attack still to project sufficiently in a concert hall. I always start quieter than one might normally begin a piece knowing full well that, over a 70+ minute duration the listeners’ ears will adjust so that by the end of the piece an effective range of, say, pp to f will have become apparent all within an overall dynamic bracket of ppp. Of course, the piano itself plays a huge role here: it is true that I had to work harder whilst playing the Café Oto Yamaha earlier this week, which though actually a pretty decent piano doesn’t have quite the impact of the stunning Fazioli piano in Montreal’s Chapelle Historique, my performance of Vessels on which caused one listener to have ‘the feeling that everyone in that concert hall–performer, composer, audience–was balanced on the fuzz of a peach.’[2]

The relationship between the two lines are an endless source of fascination to me in performance and I still hear new facets to that relationship. Because whilst my comments above suggest a continual focus upon each and every ‘now’ attack, there is also a continual tracing of the horizontal – the melodic shapes of each line. The lines continually move at different speeds (6:5, 7:6, 7:5, 7:4, etc.) and this elasticity prevents the music from settling into a steady ‘groove’. A few times a ‘groove’ does emerge, often to quite unsettling effect, making the subsequent shift to a different time frame feel all the more ‘out’. For me, as performer, this continually flexible approach to time (reflected in the notation) is what keeps me alert and curious throughout the duration of the work. If the way the lines move in relation to a pulse was more consistent I can imagine struggling more with the long duration.

The duration. It is true that Vessels is more demanding physically than, say, late Feldman, during which there are often moments to stretch, scratch, ease the tension in shoulders, etc. Vessels provides no such breaks and I find my body tensing in all the ways I warn my students against. So yes, a little stamina is required, but this is really the only challenge of the piece. In actual fact, it is a complete joy to play. No inside piano techniques to navigate, and not even changes of register to explore, instead I am entranced by the love of a) the piano, and b) pitch. Because the thing I think the piano does best is pitch. (Apologies to lovers of various tuning systems.)

I love pitch. And the pitches of Vessels are revealed as exquisite and radiant. From the first note, a solitary B, to the ensuing major 14th, a glowing, spacious quality, sliding to the single B flat only to open out again with a major 7th (D/Eb) supported by a low (for this context) Ab (a perfect 12th below the Eb) then to the semitone slide in contrary motion to create a very warm major 13th… each and every interval – no matter whether played vertically, as a dyad, or horizontally, as a contour – is to die for. I am reminded of John Tilbury’s reflection that, in Webern, the major 7th is simply a displaced octave, having warm and sensuous qualities, more like timbres.[3] There is no dissonance here – everything is gloriously consonant and light. Yet there is also a residue of tonality, such that some intervals do somehow feel to resolve and others to lean toward or away from neighbouring pitches. I find these qualities are renewed and change with each performance. So it is simply left for me to revel in these qualities – these pitches, these sounds, this action. There is no need to add any further layer of ‘interpretation’ – indeed, to do so would to take away from the qualities of the material, which needs no qualifying from me as a pianist, and would serve only to draw attention to my mannerisms. Any ‘nuance’ perceived by the listener is the result of either the particular qualities of those intervals on that piano, or irregularities in my touch and/or the piano. Again, I am reminded of Tilbury, many years ago, drawing my attention to Roland Barthes, who considered the pad of the fingers to be the most erotic part of the pianist’s body, ‘whose “grain” is so rarely heard’.[4] As I caress the keys, allowing my ear to be drawn into the ensuing sounds, I can think of few finer ways of spending 70 minutes! So when people find my focus and stamina to be worthy of praise, I’m touched but also feel guilty, as if the praise should be directed elsewhere. Because really I’m having a ball.