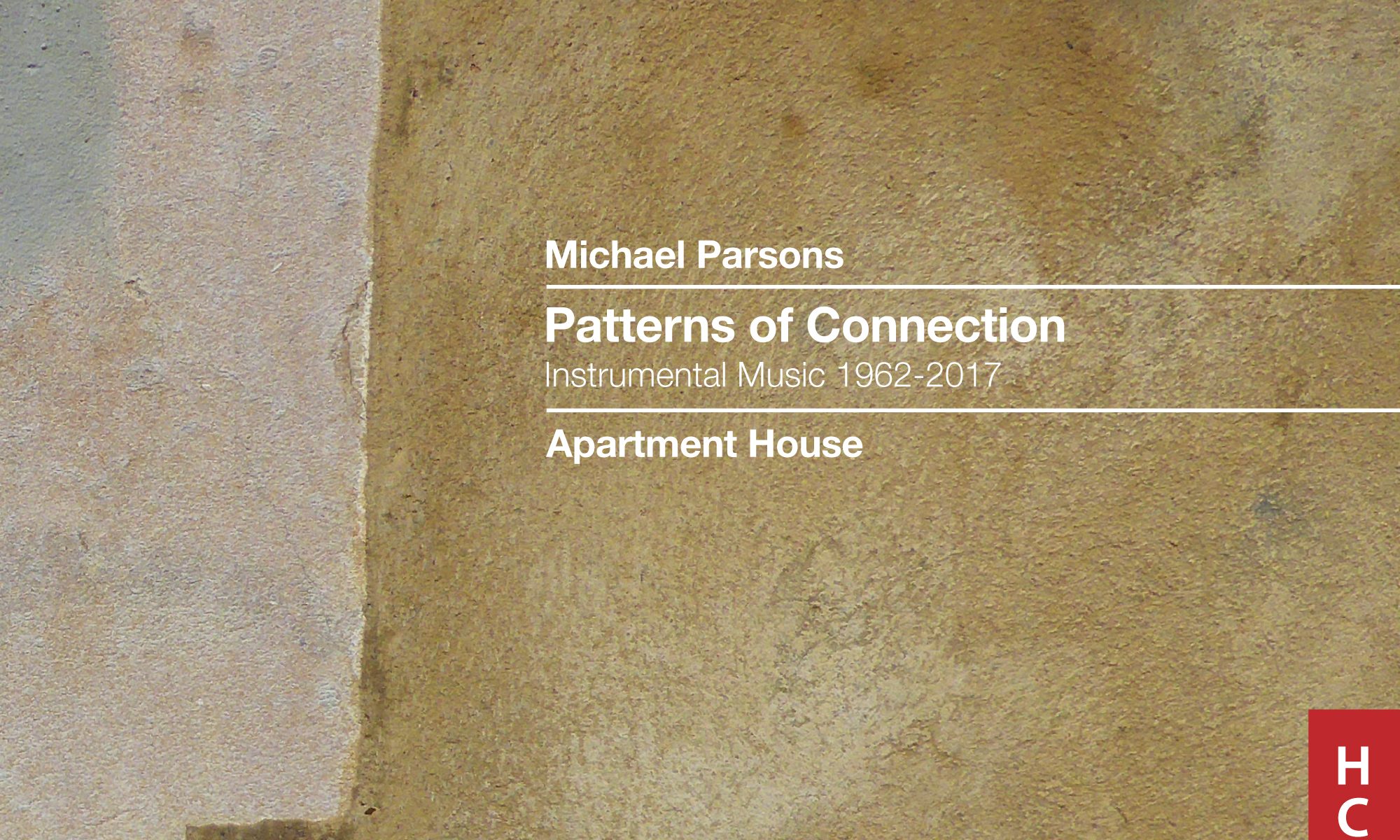 This double CD, featuring Apartment House and Philip Thomas, is the first major survey of Parsons’ music for ensemble combined with new (including a number of first) recordings of a selection of the solo piano music.

“This double album represents Parsons’s instrumental music from 1962, much of it for solo piano.Most of the 39 items are abstractly titled (10 simply called Piano Piece), but striking aleatory essays for ensemble include Concertante I, at 11 minutes the longest track. The shortest – a minute – is Kettle’s Yard Canon (flute and clarinet). A co-founder of the scratch orchestra (1969), Parsons is viewed as a pioneer of experimental music, but Modestly Ingenious would be a synonym.”
– Paul Driver (The Sunday Times)

“In 1969 Michael Parsons founded the Scratch Orchestra alongside Cornelius Cardew and Howard Skempton. Parsons’s music before then tended to post-Webernian atonality; after, he pursued a formalistic, systems-based vein, eventually readmitting indeterminate elements. Apartment House’s association with his music is longstanding (Parsons has composed two Apartment House Suites) and here the ensemble present the first substantial survey of his work. Covering six decades, it’s a rich collection that helps fill in our picture of British music since the 1960s.

The music is presented in a non-chronological order. Most works are relatively brief, many insistently repeating a given pattern – rhythmic, melodic, contrapuntal – until reaching exhaustion. 12 Part Canon(1997) for solo piano is a case in point, a babbling sheet of colour punched out from minimal means (Philip Thomas plays as if at a musical typewriter). Talea 3 (1999) for solo cello extracts unusual contours from quasi-tonal material. Kettle’s Yard Canon (1996) for clarinet and flute is reminiscent of Castiglione’s unreeling repetitions. At times it almost sounds like non-Western music, as in Percussion & Glissandi (1999), where dappled woodblock falls across sustained string and wind surfaces.

The systems-based nature of much of Parsons’s music sees unfamiliar sounds emerge from familiar material. Even when tonal elements are present, the process-based nature of the music conjures something much more meditative. In Independent Pulses(1998) colours gently flicker around the ensemble in brief notes recurring out of phase. The semi-delirious repetition of short figures in Second Bagatelle (1990) for solo piano shows from where Laurence Crane takes his cue. It’s not always successful, though: Fourths and Fifths (1990, one of three works here with that title) for solo flute is banal in material and robotic in phrasing.

The helpings here are generous – perhaps even too generous. Accordingly it’s a release to listen to not in one go but over time in morsels.”

“Although Michael Parsons was a founding member of The Scratch Orchestra, along with Cardew and Howard Skempton, his music has rarely been recorded, so this retrospective extending from 1962 to the present, and featuring a cameo appearance from the composer as percussionist, is truly welcome. Some of his pieces have resisted documentation on account of being embedded in specific environments – responding to natural echo or diffused through a particular space. But this selection brings to light examples of Parsons’s early exercises in serialism and also his personal slant on working with systems, notably the alluring Highland Variations.

Numerous other brief pieces reflect an interest in indeterminacy that flagged when Cardew forcefully renounced that mode of composition but was revived when Parsons encountered members of Apartment House. Their endorsement resulted in a fresh supply of verbally or diagrammatically scored pieces, realised here with an appropriate amalgam of tact and enthusiasm. Lukoszevieze writes of the composer’s modest demeanour. His compositions are modest too, they don’t clamour for attention. Yet their quiet intelligence and attractive clarity are very good to hear. And long overdue.”