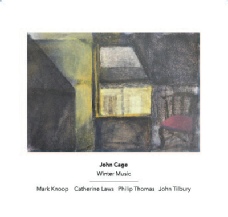 “Producing a recording of John Cage’s “Winter Music” is a challenging proposition. First off, the piece is scored for between one and 20 pianists. Then there is the score itself, a collection of 20 unnumbered pages which provide an abstracted framework which, as the liner notes to this recording explains, “are less a score in themselves than a means for producing a score.” So, the trick is to find multiple pianists who are able to dig in to their parts, come up with their own realizations and then play these in conjunction with each other. (Not to mention, of course, the obstacle of finding a place to record that has multiple pianos.) Leave it to Another Timbre to grapple with all of this and deliver a dazzling recording of the piece. The four pianists here are John Tilbury, Philip Thomas, Mark Knoop and Catherine Laws, all of whom have a depth of experience with the music of Cage and the practice of contemporary music performance.

“Winter Music,” written in 1957, came at a point where Cage was expanding his use of aleatory processes not only in the way he produced the score itself, but also in the way that the resulting score functions for performers. He had been incorporating the use of various chance operations in his compositional practice but the end result was always a fixed score to work from; notes plotted within the conventional framework of staffs. For “Winter Music,” he expanded indeterminacy to the framework itself. John Holzaepfel explains it well in his paper “David Tudor, John Cage, and Comparative Indeterminacy.” The author explains, “wherever [Cage] found an imperfection in the paper, he placed a solid note head, then overlaid the results with a single staff that turned the note heads into notes. So far, this was nothing new. But whereas in “Music for Piano” he had fixed the notes with clefs on a grand staff, now Cage “floated” the clef signs with chance operations and thereby rendered the pitch content of “Winter Music” indeterminate. So that the performer could decide which of the clefs to apply to the notes that follow them, Cage included a pair of numbers as a guide… Reading this notational system can make for rough going in performance.”

Cage’s performance instructions, referenced in the liner notes to this CD intentionally do little to nail things down in specific ways. “The notation, in space, may be freely interpreted as to time. An aggregate must be played as a single ictus. Where this is impossible, the unplayable notes shall be taken as harmonics prepared in advance. Harmonics may also be produced where they are not so required. Resonances, both of aggregates and individual notes of them, may be free in length. Overlappings, interpenetrations, are also free.” Clear? But then take one listen to this recording and everything crystallizes.

For the recording, each of the players was assigned five pages of the score through chance procedures and they agreed to an overall duration of 40 minutes. Then each went off to prepare their parts. There was no rehearsal, and the piece was played only once. Yet the clarity of their personal inroads into the score immediately comes through, creating a collective unity to the piece. Much of the lucidity comes from the intrinsic “non-framework” of the score itself paired with the guidelines of the instructions. While unfixed, the units of notes must be played with a “single ictus,” a clear attack. And while “overlapping and interpenetrations” are free, the graphical sparseness of the score itself and the overall duration demand an ascetic dedication.

What is striking is how fully attuned the four pianists are from the start. One hears the exacting soundings of clusters and chords placed with considered deliberation. While overlaps and convergences occur, an overall spaciousness is maintained. The four maintain their playing as a continuous flow across the 40-minute duration, eschewing any sense of start, arc or conclusion. It is as if this were a slice, mid-stream, of an expansive performance. What makes this work so well is that each of the performers attacks their parts with an eloquent self-assurance. Notes are sounded and keen attention is paid to resonance and decay. They are also acutely aware of the balance between sound and silence, not only of their part but to the way that the four parts intersect. Kudos are also due to Simon Reynell’s recording which does an admirable job of placing the pianists within the sonic field, providing an immersive dimensionality. ”

“Winter Music is vintage Cage, composed 60 years ago yet freshly realised with each performance. Among its numerous indeterminacies the score allows for up to 20 pianists. On this occasion its 20 pages, each carrying isolated often ambivalent and sometimes unrealisable chords, were divided equally between Philip Thomas, Catherine Laws, Mark Knoop and John Tilbury. It’s difficult to imagine four musicians better equipped – in terms of sensibility as well as technique – to play this austere yet compelling piece. Listening to Winter Music is like discovering tracks in the snow, not forming a connected or continuous trail yet still legible as temporary evidence, lingering traces of cryptic activity. Some notes are sounded with cat’s paw delicacy, deeper impressions are left by emphatic chords and thunderous clusters. Each event is placed decisively and carries its own self-contained clarity, even when others coincide or overlap. The pianists nurture resonance that glows, while bringing tension and suspense to each pause.”

“It is entirely fitting that this anniversary batch of releases features John Cage’s music as it has cropped up regularly in the label’s first decade and has clearly been an inspiration to many of its artists. The Cage composition Winter Music, written in 1957, consists of twenty unbound pages, which can be played by any number of pianists from one to twenty. Any number of pages can be used in a performance, and in any order. Each page contains notes, chords and clusters which are positioned in accordance with the imperfections in the paper on which Cage was working. For this performance, recorded in St. Paul’s Hall, Huddersfield, in June 2014, four pianists were used, Mark Knoop, Catherine Laws, Philip Thomas and John Tilbury, an impressive line-up that is testament to the label’s status. Chance procedures were used to assign each pianist five of the twenty pages. They agreed an overall duration of forty minutes and prepared their parts independent of one another. There was no rehearsal and the piece was played just once.

The insistent chords throughout the composition give it a structure and provide a sense of drama that is exploited to the full in this theatrical rendition. The lack of rehearsal gives it an edge of spontaneity and freshness. The pianists overlap with one another, making individual contributions practically indistinguishable; consequently, this is a collective triumph for the four players.”

– John Eyles, All About Jazz

“Composed in 1957 Winter Music is piano composition from reviled & respected modern classical & avant-garde composer John Cage. Here we have a 2017 release of a 2014 recording of the work, and I must say I was both pleasantly surprised & taken by this wonderfully jarring & angular work. It’s fair to say I’m not the biggest fan of much of Cage’s output – sure I understand its importance, its influence, and his innovation – but more often than not it seems his compositions seem to lack any kind of atmosphere, depth or reason. Much of what I’ve heard seems to be experimenting for the sake of it, and not coming out the other end with a focus, point or much structure. I guess you could argue that’s the point of much of his work is to push the limits, experiment & break conventions – and I’m for all of that – it just has to have some sort of impact on me – be it create a mood, unbalance me, amuse, or challenge me…and more often than not I just come away from his work bored & frustrated. So that brings us to the work at hand, and I must say it’s one of the most enjoyable & attention-grabbing works I’ve heard from Cage.

As mentioned earlier this work was composed in 1957 by Cage for 1 to 20 pianists – the score for the piece consists of 20 unbound pages and can be performed in any order. The whole idea / point of the piece is to investigate chance in composition. For the recording on this CD we have four highly respected modern pianists, Mark Knoop, Catherine Laws, Phillip Thomas, and John Tilbury. Each of the pianists was given 5 pages, each agreed on a length of 40 minutes and then prepared their parts independently. Then there was no rehearsal and the piece was played just once – with the whole thing been captured with wonderful balance & layer depth by Simon Reynell.

The above description may suggest that the work is random, shapeless & deliberately difficult. But instead, it’s invigoratingly urgent & often jarringly angular sonic experience – with very fleeting moments of melancholic beauty. The recording of this work is clearly key to it working so well – as each piano is captured with the same clarity & depth. The piece is a taut sonic tapestry that shifts from sudden darts & slams rapidly cut cascading tinkles, sly semi harmonic wonders, to brief barren flits. Throughout one’s attention is perfectly held, awaiting the next pattern or shift. Sure there is little in the way of firmly discernable repeating patterns, or structure here – like say a Feldman composition, but there’s a real feeling of danger, flair & urgency, which keeps pulling me back to work again & again.

If like me you’ve been unimpressed with Cage’s work you’ve heard in the past, but do enjoy modern composition for the piano, then give this release a go – I think you may be pleasantly surprised.”