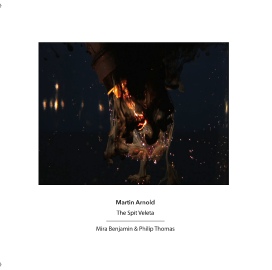 “While Linda Catlin Smith is not an unknown quantity, the other four composers featured in this set of releases are, which makes this an exciting voyage of discovery…
Toronto-based Canadian Martin Arnold was trained in the classical tradition at the University of Alberta but his live appearances are mainly restricted to monthly gigs playing electric guitar in a quartet that performs standards from the great American songbook. He comments that all the music he makes is in some way melodic, and that is fully borne out by his three compositions featured on this disc.
Interestingly, all three pieces bear titles that make reference to traditional dances in triple time—”Points and Waltzes,” “Slip Minuet” and “The Spit Veleta”—making them a coherent set. That coherence is reinforced by the playing of Philip Thomas and Mira Benjamin; the first piece is for solo piano, the second for solo cello and the third a duet, fitting as the veleta (aka valeta) is a dance in which partners do different sets of co-ordinated movements.
However, once the music begins it is immediately obvious it is not dance music; although it maintains a steady rhythm, it does not compel movement in the listener, being more of a cerebral pleasure than a physical one. (Check the excerpt from “The Slip Minuet” below for example.) In the accompanying booklet, Arnold is quoted as saying he also thinks of his music as being slack, meandering, psychedelic and, even at its most ponderously enervated, dance music.” In this, his judgment is as spot-on as his music…”
– John Eyles, All About Jazz

“Making sense – formal, harmonic, melodic, rhythmic, aesthetic – of the three works on his disc is an engaging challenge. i love Arnold’s summary of his work as “slack, meandering, psychedelic and, even at its most ponderously enervated, dance music.” There’s a great deal of truth in those words. Philip Thomas’ rendition of Arnold’s 2012 piano piece Points & Waltzes both grapples and playfully toys with the work’s never-ending melodic impulse. Based around the middle of the instrument, an upper voice provides something that one could just about call a countermelody, its notes sometimes so isolated that their connectivity is questioned. Slip Minuet for solo violin (played by Mira Benjamin) is similarly melody-obsessed, here resembling a seriously slowed-down dance, retaining something of the energy of the ‘full speed’ version but also sounding slightly unreal due to the rhythmic incontinuity brought about by its tempo, which also heightens a sense of repetition in certain harmonic progressions and rhythmic cells. Both pieces exhibit a curiously uncanny quality emanating from their unstoppability, something that finds a kind of synthesis in the duet title work, piano and violin now collaborating in music that displays an insatiable melodic instinct while again challenging its horizontal integrity. All three pieces experience a mid-point tilt on their axis. Points & Waltzes abruptly finds itself in a weirdly engrossing place of low register vagueness, every now and then clarified with triadic focus, bringing both Messiaen and Finnissy to mind; Slip Minuet splinters into pizzicati, losing its rhythmic sense almost entirely, sounding heavily filtered to the point that the music even feels rather alien. The Spit Veleta turns the tables on the other two works, challenging points of continuity by greatly stretching them with long suspended notes/chords. i have to say i found the push and pull of this connective plausibility in all three pieces to be very stimulating, and in the case of this last piece, the inscrutable beauty of its latter half is a genuine wonder to behold.”
– Simon Cummings, 5:4