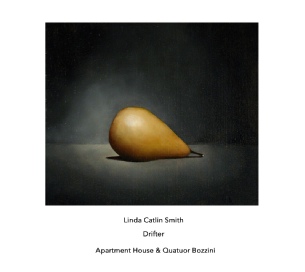 “The experiment is always about whether something will hold,” says Toronto-based US composer Linda Catlin Smith, whose music tests how sounds can be longer or shorter, thicker or thinner, higher or lower, more distant or more intimate. The results are beautiful: poised and thoughtful, never forced. Often the music is soft but tactile – Catlin Smith lets us sit with the texture of the sounds, like feeling fabric between the fingers. This album of chamber music from the past two decades follows last year’s Dirt Road, also on Another Timbre. Drifter features Montreal’s Quatuor Bozzini playing the lilting Gondola, the Turner-inspired Folkestone and the Piano Quintet with Philip Thomas in graceful form; members of the ensemble Apartment House bring lonely elegance to Cantilena for viola and vibraphone and to the lissom title track for piano and guitar.”
– Kate Molleson, The Guardian

“Having much enjoyed composer Linda Catlin Smith’s “Dirt Road” release for UK label Another Timbre, as well as Eve Egoyan’s recordings of her piano music collected on “Thought and Desire”, I was very much looking forward to this new double album of pieces for solo and small ensemble from the Canadian composer. To cut to the chase, “Drifter” doesn’t disappoint: it takes everything I liked about previous releases and casts it into new contexts, drawing out new shades of colour from what is still quite a limited range of instruments. Impeccable playing from Apartment House and Quatuor Bozzini, the Barcelona and Real Madrid of small experimental music ensembles, and great quality recordings only add to the enjoyment.
Though this is relatively quiet music, it is by no means sedentary: on the contrary, it’s constantly on the move, sometimes hurrying on by, sometimes caught in an aimless drift or relaxed meander. Smith’s melodies are often plaintive and built from a small selection of pitches, circling back without repeating themselves exactly. Like paths through the forest, you can follow them easily enough, without being sure where they will lead. At the same time, there’s a harmonic centre that remains constant throughout a piece, like the persistence of consciousness or personhood on an ever-changing path. What changes, and what stays the same — or perhaps merely contrasting rates of change, some fast enough to be audible and others not.
The influence of folk music is often mentioned in reference to Smith’s music — perhaps even more so because it seems to belong in the woods and in the fields and on the mountain than because of any explicit use of folk music tropes — and this is no less relevant to the pieces collected on “Drifter”. What is perhaps less discussed is the tinge of jazz harmonies and syncopation that tints pieces such as ‘Piano Quintet’, heard in augmented chords, flurries of strings, and gusts of piano. Where two or more players are performing, melodic lines will often echo or mirror each other very closely: the effect, perhaps most clearly in evidence on the title track for guitar and piano, is like two identical translucent images that are laid one on top of the other and then rotated ever so slightly, so that the edges of the bottom layer are partially visible from underneath the top one. This subtle almost-identity makes me listen again, and listen more closely.
The drowsy piano, cymbal crashes, and high whining violin of ‘Moi Qui Tremblais’ (‘I Who Trembles’) evokes uneasy dreams, tossing and turning in the depths of sleep. It’s perhaps the most memorable piece on the album, and one of only two to feature an unstringed instrument — if there’s a criticism to be made of “Drifter”, it’s perhaps the lack of variety over its two-and-a-half hours. It’s a double-edged sword: listening to such complex and powerfully affective music being made from such constrained resources — a small selection of pitches, steady harmony, and a limited range of timbres — is a pleasure in itself.”
– Nathan Thomas, Fluid Radio