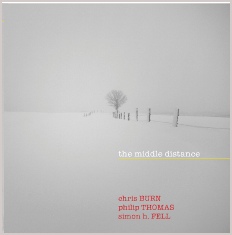 1. Looking ahead, seeing nothing
2. Not with the fire in me now
3. All moved
4. Never knew such silence
5. Looking back, remembering little

“Jo Fell’s photograph of a bleak, snowbound country road in what I assume to be deepest Creuse in central France, where she and partner Simon have been based for a few years now, probably explains why we haven’t seen much of Mr. Fell here in Paris. Happily, the five tracks on the album itself, recorded in Huddersfield, Yorkshire in February last year, are nowhere near as grey and forbidding as the cover – quite the opposite, in fact. Fell’s double bass is strategically positioned dead centre in the mix, playing umpire in a musical tennis match (Mauricio Kagel’s Match comes to mind on a number of occasions) between pianists Chris Burn (on the left) and Philip Thomas (on the right). The latter is credited as playing “prepared piano” while Burn’s instrument is just indicated as “piano”, but as he spends as much time inside it as he does tickling the ivories, the stereo placement is often the only way the listener has of figuring out which pianist is doing what. Simon Fell is still perhaps best known for his volcanic free jazz work with Paul Hession and Alan Wilkinson, or for the intricate modernism of the compositions that make up the catalogue of his Bruce’s Fingers label, but it’s also worth remembering that it was Fell, in a trio with Graham Halliwell and Simon Vincent, who inaugurated the Erstwhile imprint over a decade ago. Similarly, the albums Chris Burn has released with his own Ensemble have often been loosely filed away under “lowercase”, though despite their considerable delicacy they’re much closer in feel to mainstream European Free Improvisation than anything on, say, Hibari. Philip Thomas’s Comprovisation on Bruce’s Fingers (2007) concentrated on the more complex end of the contemporary piano repertoire, but also included, alongside pieces by Burn, Fell, Mick Beck and Paul Obermayer, a nuanced – if rather brief – reading of Cage’s Variations II. It’s clear then then we’re talking three musicians with wide knowledge of several areas of new music, the boundary lines between which are as hard to detect here as the edge of the road in Jo Fell’s photograph. The interaction is subtle and complex, and the listening – ours and theirs – is tense and intense. There’s no need to fly off the handle and smash the ball out of the court (come to think of it, chess might be a better metaphor than tennis in the paragraph above): restraint is the name of the game. And despite the considerable timbral intricacy of the preparations, there’s a keen ear for pitch at work throughout, best appreciated on the ebullient centrepiece of the disc, “All Moved”. One wonders whether the album’s five tracks haven’t been sequenced deliberately to form one of Bela Bartók’s beloved arch forms (a central scherzo bookended by slow movements bookended by outer movements recalls the Hungarian’s celebrated String Quartet No. 5) – this, and the track titles’ references to Samuel Beckett’s Krapp’s Last Tape, is further evidence of the musicians’ breadth of knowledge and deep engagement with several parallel traditions of musical thought and practice. It all adds up to a truly outstanding album, one that any self-respecting fan of new music in whatever form can’t afford to be without.”
– Dan Warburton, PARIS TRANSATLANTIC. For full review see here

“The Middle Distance – featuring Simon H Fell (bass), and pianists Chris Burn and Philip Thomas – draws on a bountiful reservoir of experimental histories. Thomas is known for his performances of Cage and ‘complexity’ composers like Michael Finnissy; in 1993 Burn issued a disc of piano music by pioneering American composer Henry Cowell, although his interest in composed means has been overshadowed by his reputation as an improvisor. Thomas, playing prepared piano, remains sonically distinst from Burn, but the music manages a noticeably unified soundworld. Fell leaves conventional bass rhetoric far behind as the musicians consciously match up their timbres; at 2’55” on track four, their extended techniques flow into a microtonal patois that trashes instrumental allegiance.”
– Philip Clark THE WIRE (for full review of set of piano releases on another timbre click here

“Given the focus of these Altered Timbre discs on piano exploration, it’s almost a surprise to encounter The Middle Distance (AT 24) played by something like a band, a trio of Chris Burn on piano, Simon H. Fell on bass and Philip Thomas on prepared piano. What is particularly delightful is the way that the three interact. If two pianos usually suggest a degree of bombast, then Burn and Thomas are the antithesis of the typical. Each works with something resembling the meditative discretion of Tilbury or Lexer, a scattering of notes here, a sudden gesture to the interior there. Fell’s sense of line and pitch inflection make him an ideal (and equal) partner and the pianos are redefined in terms of timbral possibility rather than the usual density of harmony, line and event. The performance might serve as a model for the piano in small group free improvisation.”
– Stuart Broomer, POINTS OF DEPARTURE, April 2010 (full review here)

“While all of these albums are musical, The Middle Distance is the most musicianly. Chris Burn plays directly on his piano’s strings, Philip Thomas modifies his; noted double bassist Simon Fell doesn’t touch a piano at all, although he’s done so elsewhere in his discography. The pianists each get one side of the stereo spectrum, but even if they didn’t it would not be hard to tell them apart. Although not totally allergic to touching the keys, Burn often uses the piano as a long stringed instrument, a harp or zither. Thomas’s modifications often turn his instrument into a percussion ensemble that happens to emit the odd key-strike. Fell wrenches cavernous groans and sprung wire sonorities from his bass. But more than the sounds, it’s how they find a fit together, break what they’ve found, and reassemble it that is the point. In other words, it’s all about interaction; you could, in the kindest and most appreciative way, call it good old-fashioned free improv.”
– Bill Meyer, SIGNAL TO NOISE

(reviewed alongside ‘Piano(s)’ by Diatribes/Demierre/Bourquenez): “Not your parents’ piano duos, these prime slabs of first-class improv should banish any memories of the achievements of Albert Ammons & Pete Johnson, Billy Strayhorn and Duke Ellington or even Jaki Byard & Howard Riley. Moving one step beyond the Jazz and Free Jazz of these earlier keyboard meetings, both British pianists Chris Burn and Philip Thomas on The Middle Distance and the Swiss-French recital featuring Jacques Demierre and Johann Bourquenez utilize so many extended techniques and unique string-and-key variants in their joint narratives that at times the pure piano-ness of the instrument almost vanishes into abstraction. Additionally the polyphonic textures supplied by bassist Simon H. Fell on The Middle Distance, and from drummer Cyril Bondi and electronic treatment from D’incise on Piano(s), become as much part of the interface with the pianos as they exist on their own. More restrained, yet also enlivened by the stops, slaps and clinks from Philip Thomas’ prepared piano, the five instant compositions on The Middle Distance also draw on the participants’ experience in notated and improvised music. Bassist Simon Fell is equally at home at the head of large orchestral-oriented ensembles as playing in Free Jazz combos with drummer Paul Hession. Pianist Chris Burn also deals with compositions and free forms, although he’s probably best-known for the many ensembles in which he and saxophonist John Butcher have been involved. The youthful – under 40 at least – UK equivalent to Bourquenez, is Sheffield-based Thomas, a senior lecturer at the University of Huddersfield, who is involved with the so-called classical experimental ensemble Apartment House as well as improvised sounds with saxophonist/bassoonist Mick Beck. On this CD Fell is as much a musical collaborator as the two pianists – especially at those junctures where his pulsated pops, reverberating thumps and sul ponticello slices appear to mirror – or is it vice versa – the taut rubber-band like thwacks and knife-plucking-like scrapes from Thomas’ instrument. As those two vie to destabilize the sound field with angular pacing, Burn does his part with rubato patterns and voicing which emphasize the piano’s accepted versatility. At points he stomps out thick rumbles with the pedals; at others exposes swift kinetic runs from the keyboard; and at other junctures posits full-fledged arpeggios. Should Fell advance the polyphonic themes with triple-stopping or scrubbed bow bouncing; or Thomas slap the objects resting on the prepared strings to create high-pitched harpsichord-like reverb or node extensions; Burn has an appropriate response. Rumbling low notes at one end of the keyboard, or simple clamorous textures from the other add a staccato urgency to simplistic “Chop Sticks”-like clinks. Overall, his sequences flow sympathetically and nestle harmonically among the others’ physical gestures. More than piano duos, these CDs are united in offering notable group creations.”
– Ken Waxman, JAZZWORD