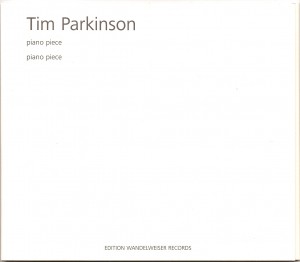 “Its hard to explain why I say this, but there is a freshness to this music I rather like. The playing feels light and airy, the notes bounce from one to another, and even though they don’t seem to go in the directions that might sound familiar there is something well formed about the music, it does sound complete somehow. Parkinson writes that he wanted to focus on the present, make each moment in the first piece a new beginning. This certainly feels like it has been achieved. As each part of the work begins I have found myself forgetting what came before. The unnatural progressions from one part of the music to another make it hard to pull the whole piece together in my head so I can evaluate the structure or overall atmosphere. Both of the pieces here sound more like musical journeys than concise works with a beginning, middle and end…If improvisation, at least in its formative years went in search of non-idiomatic playing then maybe this piano music is doing something similar, and coming very close to achieving it.”
– Richard Pinnell, THE WATCHFUL EAR (for full review, click here)

“Philip Thomas’ sublime recording of Tim Parkinson’s piano music recently released on Edition Wandelweiser will soothe the most fevered of brows. Formed of two extended works for solo piano – piano piece 2006 and piano piece 2007 – this is very precise, intelligent and simply beautiful music performed by Thomas at the absolute top of his game.”
– Graham McKenzie (director, hcmf), SOUND AND MUSIC

I think this is meant well, but not entirely sure…! – “Whatever well-worn phrases like ‘cutting edge’ and ‘state of the art’ may have implied in more idealistic times, these two piano pieces by London based Tim Parkinson are effortlessly ‘it’. Having absorbed Morton Feldman’s parables about the limitations of dramatic rhetoric, about form-being-content-being-form too, Parkinson edits together scrappy bits of scales that stop suddenly, chord sequences that drop to bits, nonsequitur melodies and misterioso systems that repeat for irritatingly too long – all arranged with obvious high compositional intelligence to sound like what arbiters of ‘good’ compositional taste would certainly consider an embarrassing fuck-up. That’s progress for you…”
– Philip Clarke, THE WIRE